Health, is our true wealth. In this article we will explore some simple concepts about :

// What is Parkinson’s Disease?

// What are Lewy bodies?

// What is the Basal Ganglia and Dopamine?

// The 5 categories of Parkinson’s Disease

// Medications and changes to expect.

What is Parkinson’s Disease?

Parkinson’s Disease is classified as a movement disorder that is most likely to onset for people in their 50s and  60s. Although about 5 % of Parkinson’s Disease cases occur in people under the age of 40 years.  Michael J Fox (actor) is an example of an early onset. There are some known examples of an inherited form of the disease through a mutation in the 4th chromosome, however there is a high suspicion, that the condition is linked to environmental factors such as exposure to manganese, iron, pesticides or repeated head traumas (Mohammed Ali). At this stage there is no confirmed reason why a person will develop PD, what is known is that it is a progressive neurological condition.

What are Lewy Bodies?

Lewy bodies are a description of a build up in the brain of a protein called alpha-synuclein. This particular protein deposit has been identified in a number of diseases including

Lewy body disease is still not well understood, and people can present with a variety of problems in the early stages of the disease. They may have problems with autonomic (the system that automatically regulates bodily functions such as breath and temperature), cognitive (thinking), behavioural or motor functions. It is for this reason that it can be hard to identify if a person has Parkinson’s Disease or some of the other Lewy body conditions.

What is the role of the Basal Ganglia and Dopamine?

The Basal Ganglia, does sound like Thai food, but it is really an important part of a brain. It is essentially an area deep in our brain that serves as our movement centre. The Basal Ganglia can be considered an editor for movement inputs and outputs and helps with the regulation of a neurotransmitter called Dopamine.  Neurotransmitters are the chemicals that are produced by our body so that the nerves achieve certain actions eg. movement, relaxation, contraction of muscles and so forth. There is a lot of chemistry required for the nerves to work. Diseases such as Parkinson’s Disease affects the chemistry of the brain, in particular, Dopamine, so that movement becomes dysfunctional. Dopamine is a neurotransmitter that regulates smooth muscle control and inhibits the release of another neurotransmitter known as GABA (gamma-aminobutyric acid). Dopamine encourages movement and GABA inhibits movement.

Accordingly, when there is too much Dopamine in our body we can have too much movement, in conditions like Huntington’s Disease, whilst when there is not enough movement we can start to freeze up which is what happens in conditions such as Parkinson’s Disease. As this is a chemistry process, medications (LevoDopa) are often used to replace the missing Dopamine, but this medication does not stop the underlying condition it just treats the symptoms. 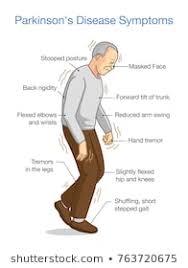 Bradykinesia is the slowing down and loss of spontaneous movement.  You might recall that when we spoke about the neurotransmitters Dopamine and GABA and how these different chemicals affect movement. This loss of movement  and freezing increases over time, and much of the movement and exercise strategies discussed later in this article are aimed at addressing this particular symptom.

Tremor, in the early stages of Parkinson’s Disease has a distinct pattern and is evident in about 70% of cases. It is called a resting tremor that is generally very specifically identifiable when a person is not using a particular limb and will be more evident on one particular side.  In the early stages of the disease a person will be able to control the tremor by engaging in activities such as grasping onto an object and movement. It is important to remember that a resting tremor is different to an essential tremor. Many people have what is known as an essential tremor, and mistakenly think that they have Parkinson’s Disease.

Rigidity, refers to the resistance felt in muscles when they are passively moved.  This can be described as “lead pipe” rigidity when the resistance is consistent. “Cogwheel” rigidity is the term used when the resistance to passive movements has a regular jerking characteristic.  Muscle rigidity, as with all PD symptoms, first presents as unilateral (one sided) however with progression becomes bilateral.  Muscle rigidity accounts for the neck and shoulder pain sometimes experienced early in the disease process.  Hypomimia(or facial masking) is a medical sign where there is a reduced degree of facial expression and is often seen in people with Parkinson’s Disease and also MS.

Postural instability Postural changes are evident as forward flexed or stooped posture.  The ability to maintain posture and balance may be affected in PD.  This symptom may appear later and is often the cause of falls because the ability to correct one’s balance is compromised.  This may lead to unsteadiness when walking, turning or standing.

Dystonia, or abnormal posturing, can accompany PD and can be very painful. Some typical patterns of dystonia include curling of the toes or inward turning of the foot. Dystonia may appear when there is a decrease in brain Dopamine levels, which could occur first thing in the morning before taking medication or when a dose of medication is wearing off. If this is the pattern that is noted, various strategies can be implemented to decrease the OFF time. Dystonia can also be a side effect of treatment with levodopa. This on-off affect is discussed later in this article.

Voice loss or a very soft voice can be another symptom, and can be addressed with Speech Therapists.

Apathy, Adhonia ( the loss of enjoyment), anxiety, cognitive decline and depression are all other symptoms of Parkinson’s Disease.

Micrographia is an acquired disorder that features abnormally small, cramped handwriting or the progression to progressively smaller handwriting. It is commonly associated with neurodegenerative disorders of the Basal Ganglia, such as in Parkinson’s disease.

The symptoms are very distinct and are generally managed through medication, physical therapies and exercise. The general focus of most treatment is at a symptom level aimed at maintaining physical, emotional and cognitive function for as long as possible.

Remember when working with a person who has Parkinson’s Disease remember they have family and friends who are also needing care and support as well.  Sometimes your class program is about allowing the carer respite or an opportunity to do something for their body and health at the same time.

The stages of Parkinson’s Disease

There are considered to be 5 stages of Parkinson’s Disease ( Hoehn & Yahr, 1967)

Stage 5 – Confined to a wheelchair

No one can say when exactly a person with Parkinson’s Disease will enter into a particular stage and how long the person will stay in a particular stage.  What is generally recommended is that those experiencing the disease maintain and regularly review their medication and stay physically strong throughout the disease to remain independent for as long as possible.

Initial therapy is usually levodopa (administered with carbidopa), is the most effective treatment available for the management of motor symptoms of PD, including rigidity. However, it can cause a side effect known as dyskinesia, which are abnormal involuntary movements. Dopamine agonists are less effective on the motor symptoms of PD but have a lower rate of causing dyskinesia, although they have other side effects. MAO-B inhibitors are less effective than levodopa or dopamine agonists, however they have fewer side effects.

Choice of medications is dependent on the individual who will need an understanding of the risks and benefits of each class of medication. A person’s neurologist will oversee the medications and their will be regular reviews. However, in a movement class it is important to understand what medications a person is taking as it can have certain side affects including dyskenesia.  This video is a good explanation of the process of the dyskinesia and what is called an “on-off ” affect of the medication. Understanding this process is important for timing of activities and exercise classes for people living with Parkinson’s Disease.

For those of you interested in the process, the video below is interesting in how it explains the role of Deep Brain stimulation and what is done to reduce the tremor. The video is about 30 minutes long, so you may want to save this article and video until later.

There is a lot of research happening about exercise and Parkinson’s Disease, such as the LSVT program ( see below video ), Parkinson’s Warriors and many other programs.  A recent meta analysis of pilates (Suárez-Iglesias , Miller, Seijo-Martínez, & Ayán, 2019) showed that pilates plays an effective role in movement programs for people with Parkinson’s Disease.  The common themes in the exercise focus was:

In the video below you can see ideas from one such program on big movement patterns and activities. When I look at some of these exercises you can see how they incorporate common exercises seen in pilates and gyrotonic method.  It is just that these exercises are done with more force than normal.

Some ideas that can incorporate large stepping movements, easily using the pilates apparatus and traditional exercises. Just the focus and cueing strategies are different.

Cueing is important whenever you teach and work with people. When working with clients with PD the best practice guidelines (Occupational Therapy for people with Parkinson’s, 2015) suggest three key principles:

a. Conscious attention is required for the performance of well-learnt motor skills and movement sequences

c Encourage the use of cognitive and sensory cues and triggers to guide the flow of motor performance and ideas.

// Visual environment – means that when you set up your exercise space avoid patterned floors and carpets as it can contribute to confusion and freezing.

// Use visual cues like floor markers that are colour contrasting. These floor markers can be used in doorways or pathways as cues to help with movement and maintain flow of gait.

// Music and rhythm. Rhythm has been shown to be a key part of working with clients who have PD.

In our drop foot article we discuss more ideas about what to be done to help people with gait problems.  However, some ideas are also explained in this video below. Face, neck and shoulders

Balance is an issue for many conditions not just for people with neurological conditions. We explain more about balance and ideas for balance in this article . From 2020 we will also be teaching a course for practitioners about the balance systems.

Some of the earliest experienced symptoms of PD, are neck and shoulder problems . In this video we have incorporated a simple series of exercises that can be done at home.

For those interested in neurological conditions and Parkinson’s Disease we will be releasing the Introduction to Neuroanatomy online course in January 2020 If you are interested in this course please email us education@bodyorganics,com.au and we will notify you on release.

In 2020 Mariska Breland will be presenting the Parkinsons Disease course ( part of which is available online ) and some of her other neurological conditions based courses in Australia, in Melbourne, Sydney and Brisbane. For those interested in attending those courses contact us at education@bodyorganics.com.au